Market suspension lifts, but underlying drivers may stick around

It has been a chaotic few weeks on the east coast, culminating with the national electricity market being suspended on 15 June 2022, an outcome not seen in the modern version of the NEM. There has been much coverage of the key drivers of the crisis. It stems predominantly from a perfect storm of two main factors: thermal unit outages and high thermal fuel costs, as the NEM largely relies on thermal generation. However, from 4am on Thursday, 23 June, the market started to set prices again, meaning a road out of suspension is near. The Australian Energy Market Operator (AEMO) says that since the market was suspended, it has seen an improvement in market conditions, including ~3-4 GW of generation returning from outages, which has given AEMO the confidence to move to lift the suspension. If AEMO is happy with the pricing and operation of the market, then the market suspension could be lifted completely.

The level of unit unavailability over the past fortnight was among the key drivers of the market events that transpired. Therefore, their return to service should go a long way toward improving the supply/demand balance and lowering the requirements of AEMO to intervene manually.

It is important to note that even if the market suspension is lifted, one of the major underlying conditions which led to the Administered Price Cap being triggered is still present. High fuel costs remain and are likely to persist over the short/medium term. The ACCC netback price series suggests forward prices of ~$35/GJ until February 2023. Given the links between international and domestic markets, it stands to reason that domestic prices will also remain elevated.

Sustained high gas prices up at $35-40/GJ in most states translates to short-run marginal costs for peaking generators around $350-400/MWh to break even (assuming a heat rate of ~10 GJ/MWh).

This SRMC value is lower than the average price required to breach the Cumulative Price Threshold (CPT) in a week of ~$674/MWh, so assuming that generators offer capacity around their SRMC, similar circumstances could be avoided. However, while the application of Administered Pricing may be avoided, the market will likely remain at relatively high prices in the short term, all else being equal.

Looking forward through MTPASA shows that the next few weeks will see a further return of capacity. This may be enough to ease pressure on prices towards more stable outcomes. However, it is also important to note that some units have planned outages scheduled for the coming months.

The chart below visualises the change in availability for select units over the next two months – those whose availability is subject to change (blue boxes indicate a unit is in service). We can see a gradual increase of capacity returning to the market through July of around 2.5 GW, which may be enough to ease pressure on prices towards more stable outcomes. However, it is also important to note that some units have planned outages scheduled for the coming months, like Stanwell U4. 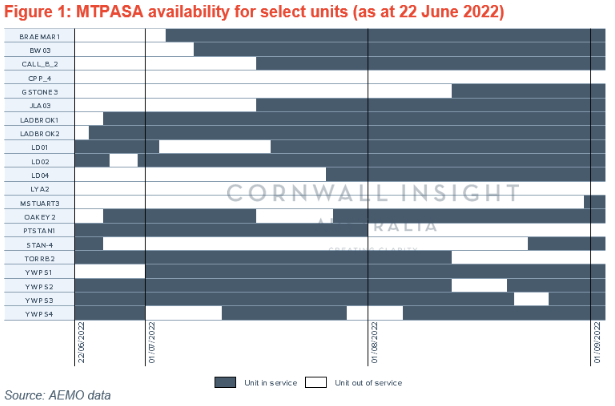 So in the short term, the situation in the NEM will likely remain dynamic. Those familiar with these phrases would know this means the situation could change quickly, especially if external factors change from expectation. Therefore, careful attention should be placed on the near term.

While the short-term focus will remain, it is important to lift our eyes up and over the current situation into the long term to avoid/limit these circumstances from occurring again.

The first thought is to diversify the NEM’s supply. As the old saying goes – don’t keep all your eggs in one basket. We have seen the case for dispatchable generation when the wind/sun doesn’t blow/shine, but the past fortnight has been a reminder that no technology is immune to market forces. The investment in renewable capacity is already occurring but likely has to find another gear, particularly in Queensland, which has plenty of ground to make up for its QRET ambitions in replacing coal generation.

Furthermore, there needs to be a strong signal in the market for dedicated reserves. That is, capacity whose express function is to operate unimpeded when it is most required in high impact, low probability events. This may be a more costly insurance product for the market, however when compared to the cost of compensation likely to be paid out from the past fortnight (and beyond), it may make sense.

For reserves to be effective, there should be a clear link between reserve provision and the delivery of that capacity when it is most required. We do note that the ESB has recently released a capacity mechanism consultation paper that would place a value on capacity however, at first pass, it does not appear like this would have prevented the current market events from occurring. Other options are being progressed currently, like Iberdrola’s proposal for an Operating Reserve market (ERC0295) which could be a suitable longer-term operational option.

A final aspect we should also consider is compensation frameworks and mechanisms. There appeared to be a distinct change in operation when the CPT was breached and APC was applied, prompting generators to withdraw from the market. This poses a question as to whether generators have a preference in compensation mechanisms in extreme market events – that is, AEMO directions compared to the APC framework. This may be explored when the current event is in the rear view.

Like most, we will be keeping a close eye on the outcomes over the short term, particularly watching how higher gas prices flow through to the electricity market. To the extent that generation sources are diversified, price pressure could be relieved. However, if increased generation requirements are placed on thermal generators over the coming months, the NEM could be in for a cold and bumpy winter.